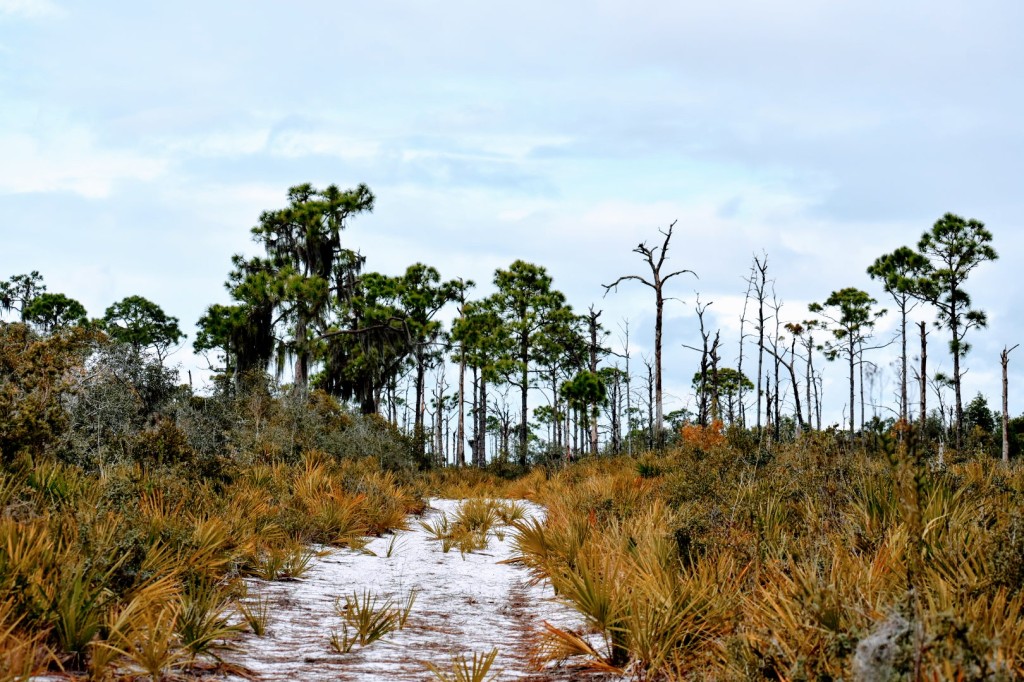 The Florida Scrub-Jay is a striking blue and slate colored Florida native that relies on Florida’s distinctive scrub habitat for survival. It’s intelligent, friendly, and altruistic, and it’s the only endemic species of all of Florida’s birds.

The Northern Mockingbird is a cacophonous grey and white no-goodnik that has a reputation for bullying and theft. It wreaks havoc throughout North and Central America.

One of these is Florida’s state bird. It’s not the Scrub-Jay.

In this post, I humbly submit a proposal for the formal appointment of the Florida Scrub-Jay as the State Bird of Florida. What follows is not mere mockingbird slander, but an accounting of some of the many deeds and qualities of the Scrub-Jay that suggest–perhaps Demand–that the State of Florida strip the mockingbird of the undeserved honor as the peninsula’s prime avian representative, and grant the position of Florida’s top ambassabird to the humble jay of Florida’s beautiful scrub.

Sometime roughly several million years ago, populations of Western Scrub-Jays headed to Florida. Finding the weather to be quite pleasant, they decided to stay. Like other species that vacation in Florida and stick around too long (e.g. snowbirds, the Skunk Ape, Florida Man), these birds eventually became a unique species: the Florida Scrub-Jay (Aphelocoma coerulescens).

For some time, the Florida Scrub-Jay shared the peninsula with the likes of giant ground sloths, mammoths, mastodons, rhinos, terror birds, horses, camels, and armadillos the size of VW Bugs. All of these species were native to Florida, and all of these species went extinct within about 2000 years. This was due at least in part to the arrival of a new resident in North America: humans.

But they aren’t out of the woods yet. The Florida Scrub-Jay survived the great extinctions of Pleistocene megafauna in Florida, only to tread the waters of extinction thanks to the people that brought you winter citrus, the strip mall, and Margaritaville Resorts.

Florida’s scrub habitat is a unique and fragile plant community that is characterized by woody evergreen shrubs (saw palmetto, Florida rosemary, sand live oak, scrub oak, etc.) and patches of bare, white sand. More than thirty plant and animal species depend on the scrub community for survival, and dozens of these species occur nowhere else on earth.

Classic pieces of Florida literature like Rawlings’ The Yearling and South Moon Under, and Smith’s A Land Remembered are set in Florida’s scrub, which has long symbolized Old Florida’s harsh frontier, and the tenuous relationship between humans and nature. But if the scrub symbolizes exacting hardiness, and perhaps scant opportunity for only those willing to work the hardest to achieve it, the Scrub-Jay must symbolize the fragility of the scrub–Florida’s most distinctive ecosystem–which is itself critically endangered.

Like the Everglades, the Scrub-Jay habitat was seen as “worthless” until people realized they could make money off of it. Also like the Everglades, people began rapidly destroying it in pursuit of this financial gain, prompted by two major catalysts: First was the discovery that citrus could be grown in the scrub’s sandy, infertile soils. Second was the proliferation of air conditioning, which made life in South Florida tolerable for weenies and encouraged the unmitigated urban sprawl that continues to decimate the Florida scrub.

Steep declines in the quality and quantity of scrub habitat can primarily be attributed to agriculture, residential and commercial development, and habitat fragmentation, but fire suppression has also contributed. Alteration of the habitat’s natural fire regime, which is essential to its survival, quickly leads to the establishment of a dense canopy that produces too much shade for the survival of the woody underbrush. The resulting habitat is inhospitable to most species that make their home in the scrub.

Since the arrival of Europeans, Florida has lost an estimated sixty percent of its scrub.

The Scrub-Jay range does not extend beyond scrub habitat, so these perils are shared. A 1992-1993 study confirmed that Scrub-Jays have gone extinct in 10 of the 39 Florida counties that they once occupied. This aggressive decline happened within the span of 20 years. According to the University of Florida IFAS Extension, only 3000-4000 family groups remain after an 80-90% decline over the last century.

A Real Symbol for Real Florida

Survival of the Florida Scrub-Jay, the state’s only endemic bird species, relies wholly on preservation and proper management of Florida’s most distinctive ecosystem. We know what must be done to protect and reestablish scrub habitat across Florida; perhaps what we lack (other than a functioning legislature) is statewide awareness.

But why else would the Florida Scrub-Jay make a great ambassabird for the state?

As a really friggin rare bird, people already flock to Florida just to catch a glimpse of it. But their friendliness may also prompt a few non-bird-obsessed tourists to step outside of Disney’s gilded walls and into the scrub for a few hours. (DISCLAIMER: you should avoid feeding them because it’s dangerous for any animal to become habituated to people. For this reason, it’s illegal to feed Florida Scrub-Jays except under the direction of the Florida Wildlife Conservation Commission.)

The Florida Scrub-Jay has “Florida” right in the name

And cooperative breeders! They’re one of the few cooperative breeding birds in North America. In these social systems, offspring receive care from the parents as well as additional group members. Scrub-Jay fledglings will remain in their parents’ habitat for several years to help rear young, scout for predators, and defend territory against other Scrub-Jay family groups.

This may not seem unusual but think about it this way: reproduction is the ultimate measure of success in nature, and instead of pairing up with their own mates, these young birds forgo reproduction and assist other breeding pairs with gathering food and protecting the nest from predators. This constitutes one of the classic and most well-studied examples of altruism in nature, as described in E.O. Wilson’s influential publication Sociobiology.

The Case Against the Mockingbird

Look, I’m a big bird guy. I haven’t met a bird I didn’t like. Still, the mockingbird doesn’t deserve to occupy the highest perch in the State of Florida. So, I must do my duty, and slander the heck out of them. Here goes:

They’ve been known to harass humans…even children! They show no regard for basic human or animal decency. They never forget a face.

Mostly gray and black, they only offer glimpses of white when they fly, or worse, when they flash! That’s right, folks. These guys won’t hesitate to walk up to another individual, and flash them in. broad. daylight.

Mockingbirds range all over most of North and Central America. To make matters worse, they are promiscuous (socially monogamous at best, polygynous and bigamous at worst!). Males will even attempt to lure females from the nest of mated males. Heck, they are already the state bird of five other states. Do we really want to settle for sloppy sixths?

Adults leave their young to fend for themselves after only 10 days. Family values? I think not.

They’re no good, low down thieves and plagiarizers

They won’t hesitate to steal songs from other birds, and it doesn’t stop there. They’ll even mimic cat and dog sounds, cricket chirps, and other insect noises! What’s next? Will they call your grandma and mimic a Nigerian Price looking to share his fortunes?

Speaking of wealth, Florida Scrub-Jays practice a sound investment strategy by gathering nuts and storing them underground in preparation for the winter. The only wealth a mockingbird has is the intellectual property it steals from other birds.

To top it all off,

the state bird designation isn’t even law! Former House of Representatives Democratic Leader Mark Pafford led an impassioned, yet ultimately failed charge to make the Scrub-Jay the state bird of Florida. In his opinion piece published in 2016, he makes the following case based on sound legislative policy:

Must we continue to pay for this archaic mistake, and allow the mockingbird to squat on this fraudulent designation for another 100 years?

This was not the only push to honor the Scrub-Jay. In these efforts, we face fierce competition from the primary lawmaking body in Florida: the NRA.

The opposition is led by Marion Hammer, aptly described by Craig Pittman as “a 4-foot-11 grandmother with a bowl haircut and a fondness for lipstick the color of arterial blood.” As the NRA’s top lobbyist and its first female president, she’s also one of the most powerful people in the state.

“In 1999, more than ten thousand schoolchildren signed a petition to change the state bird to the Florida scrub jay. Supporters of the scrub jay boasted about how gentile it is, that it will eat peanuts right out of a person’s hand.

Wielded by the Hammer, the legislature told the kids to shove it, and voted to keep the mockingbird. The push came again ten years later, but this time backed by a fierce raptor, the Osprey. Surely The Hammer could stand by such a strong symbol of power and mastery over sea, air, and land.

Nope. She wanted the mockingbird, and lawmakers listened to her.

This wouldn’t be the last time Florida’s legislature prioritized the demands of the NRA over Florida’s children.

Towards a More Scrubby State

Tame. Cooperative. Friendly. Monogamous. Altruistic. Frugal. Modest. These aren’t qualities that come to mind when you think about Floridians. You might say we deserve the thieving, bullying, promiscuous mockingbird in its drab gray.

Well to that, I say we can be better.

And how do we get there? Let’s look to the Scrub-Jay. Let’s allow this magnificent bird to guide us into a more promising future by repairing the damage done to its home in the past. And let’s do it before it’s too late.

Begin typing your search above and press return to search. Press Esc to cancel.